Daily Challenge: Have a tea party.

Today, you are writing the second part of your explanation text. Have a look at the video for what you need to include. 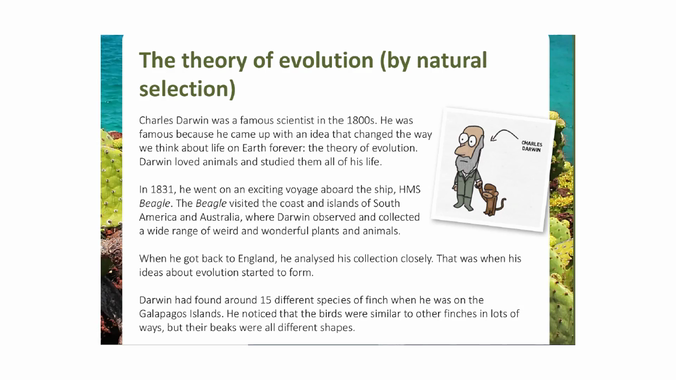 Think about what we have learnt about parenthesis for the last two weeks. We can also use dashes - - to show a subordinate clause. Complete pages 54 and 55 in your Grammar book.

Find out about the monk and scientist, Gregor Mendel (1822–1884), whose research using thousands of pea plants informed his theory of inheritance and supported Darwin’s theory of evolution.

Think about this test. If you have any of the equipment at home, you could give it a try.

Set up a simple test to explore the differences in Darwin’s and Mendel’s ideas on inheritance.

Test Darwin’s theory by mixing yellow paint and blue paint in a bowl to make green paint. Discuss how, if yellow is one parent and blue is another, all offspring would be green.

Test Mendel’s theory by mixing yellow and blue beads in a bowl. Discuss how, if each colour was the parent, offspring will be either yellow or blue, not green.

What are the differences in the two theories?  Think about what characteristics that you have inherited from parents or grandparents, and how they are similar to or different from their siblings.

Note: Darwin believed that traits blend when inherited, so a tall person and a small person would have a medium sized child. However, Mendel discovered that traits were inheritable due to particles, which we now know as genes. Genetic inheritance is not quite as simple as the test in this activity, but children are not required to understand the intricacies in any greater depth at this stage.

Unfortunately not the ones with chocolate chips.

Some cookies are necessary in order to make this website function correctly. These are set by default and whilst you can block or delete them by changing your browser settings, some functionality such as being able to log in to the website will not work if you do this. The necessary cookies set on this website are as follows:

Cookies that are not necessary to make the website work, but which enable additional functionality, can also be set. By default these cookies are disabled, but you can choose to enable them below: