Useful Document - Use the links on this document to help you with your homework.

Year 3 have been looking forward to this all term! Finally, erupting their volcanoes that they created for their homework. Lots of 'ooohs' and 'woooaahhs' as the lava erupted from the throats of the volcanoes! 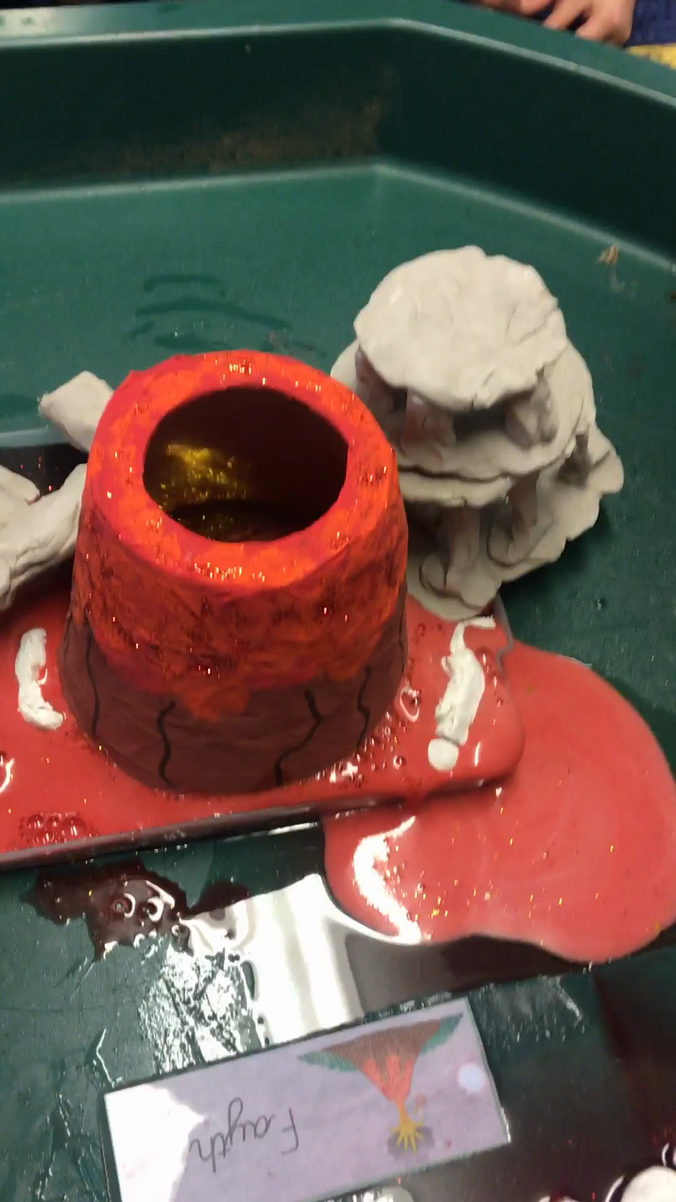 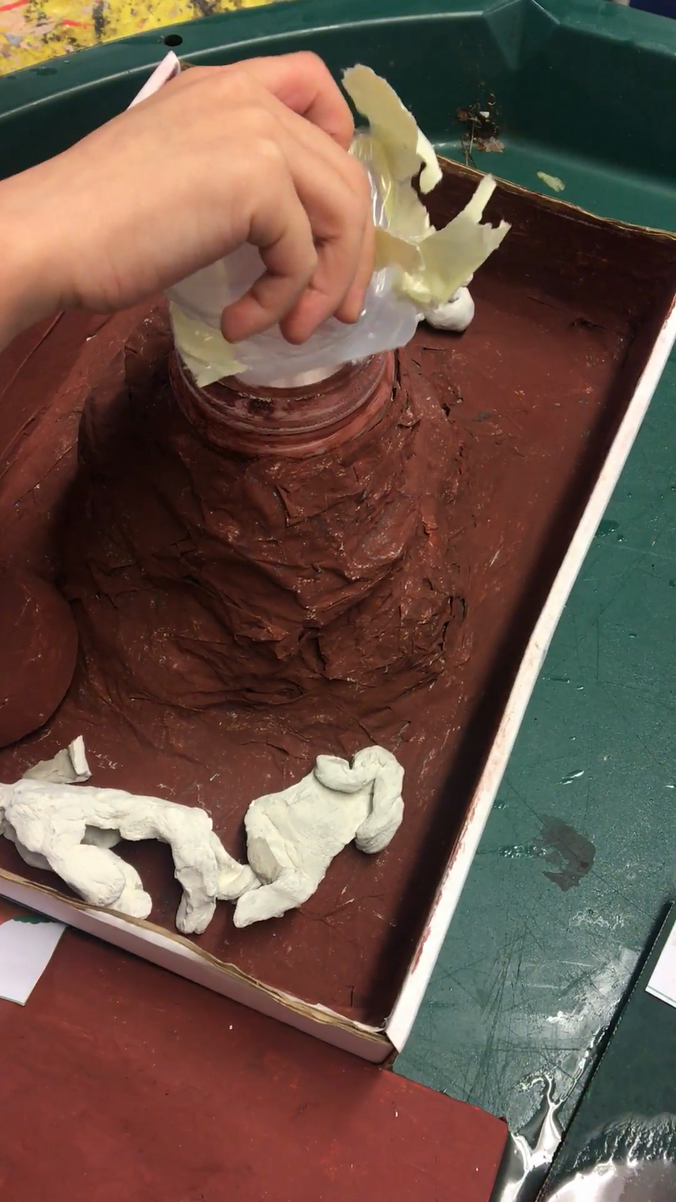 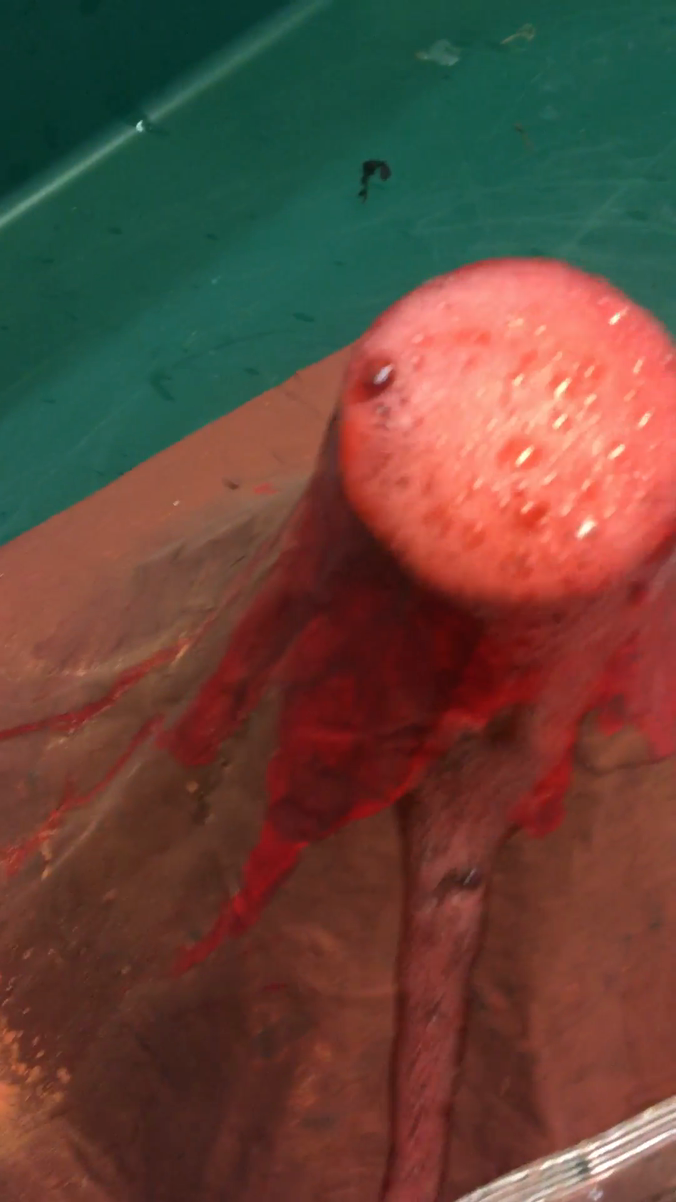 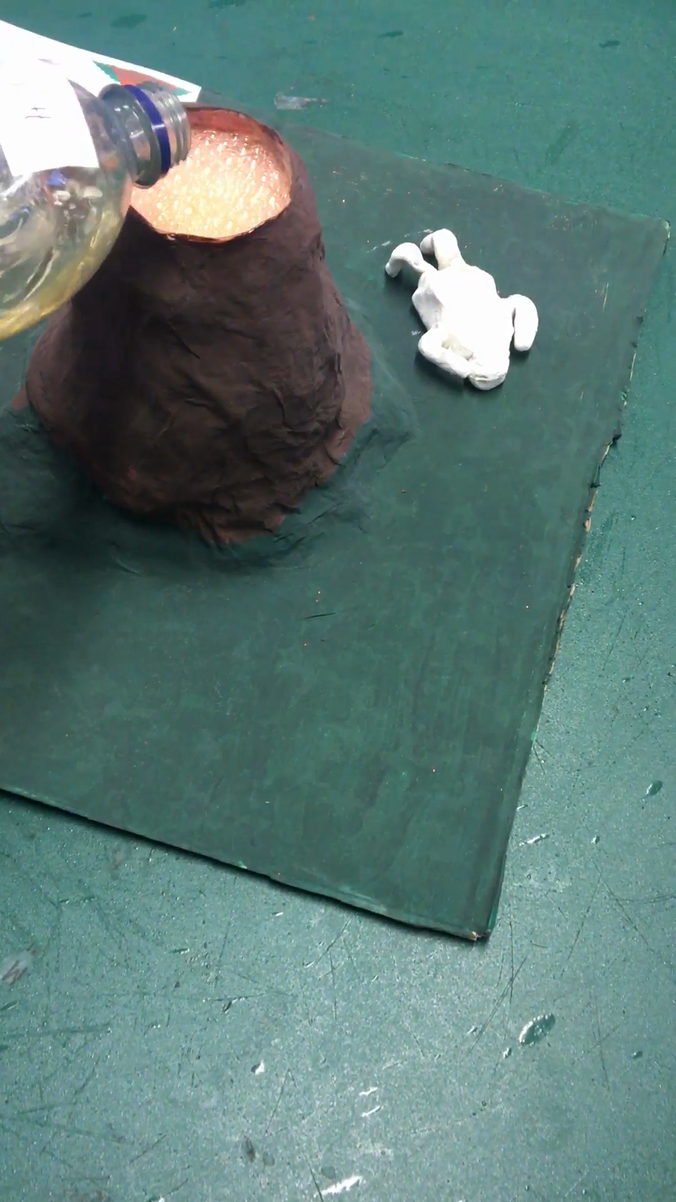 Year 3 have learnt a lot of French in the first term and today they had the chance to put together a basic conversation with their partner.

This week in Year 3, the children have been looking at 2D and 3D shapes. Today, one group looked at the properties of 3D shapes and labelled these on a piece of paper around the shape.

This week, Year 3 have been looking at narratives, which use figurative language. They had to imagine themselves to be either a tornado, a tsunami or a volcano. They then had to use different similes, metaphors and examples of personification to describe their movements and their actions.

This afternoon, Year 3 and 4 joined together to take part in two different activities. The first one involved using a compass and following directions from different starting points. They then had to unscramble all of the letters to create a technical term for the current project. Next, they worked in groups to create an explanation video to demonstrate how to keep themselves safe in the event of an earthquake.

As part of the innovate week for their current project, Year 3 continued looking at Arthur's Seat in Edinburgh. They had to imagine that some seismic activity had been recorded in the area and that the government needed to have an emergency procedure in place, in case the area moved to 'Red' alert. They had to design a 24-hour plan, which highlighted what they would do in each hour, to evacuate the city and surrounding areas.

Today, the children were looking at right angles. They had discuss what they are and then used a right angle tool to find right angles around the classroom as well as seeing how many right angles some shapes had.

This week, Year 3 are looking at angles and how these can be seen in shapes as well as being used when directing somebody. This group had to direct their partners around the playground using directions like: 1/4 turn, 1/2 turn, 3/4 turn as well as clockwise and anti-clockwise.

This week, the children are moving into the innovate week of their current Tremors project. They started by researching Arthur's Seat and then found out its location using Google Earth. They then drew their own maps, which has to include local cities and towns around Arthur's seat as well as main roads, river and ports along the coastline.

It was great to see a pupil using their own initiative to build on their skills of Explain Everything, following the lesson with Mr Carlton yesterday. It was made even better when the pupil included a song from their music lessons and applied it to the current project! Great work! 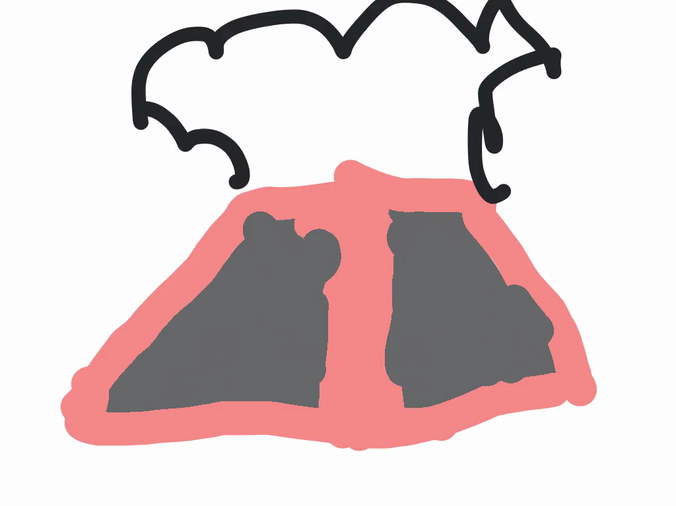 This afternoon we continued our Tremors composition work in Music by creating our own volcano eruption.  We chose appropriate instruments from the trolley, talked about the form of the piece and the importance of dynamics and then worked as a team to create this fabulous composition: 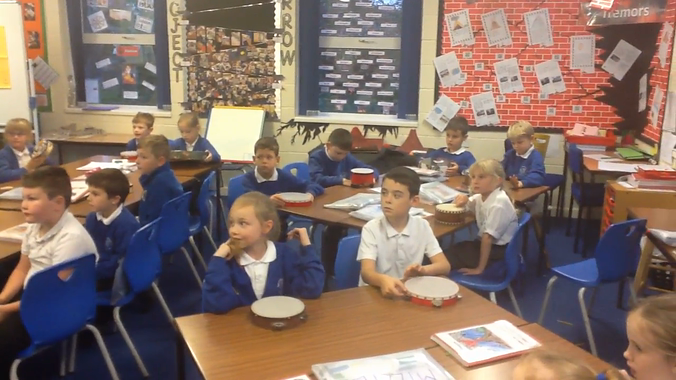 This afternoon, Year 3 were very lucky to have Mr Carlton come into school and work with them on the IPads. They learnt how to use some of the features on a useful app called 'Explain Everything'.

This afternoon, Year 3 continued with their learning about the story of Pompeii and Mount Vesuvius. They looked at what the buildings would have been like during this time period and  find some information to create a fact file. They then created the building from clay.

This week, Year 3 have been creating their own newspaper articles this week about a natural disaster. They had the choice of the 2004 Boxing Day tsunami, the Haiti earthquake or the Iceland ash cloud. They created a masthead as a class and created their own headlines for their news stories.

This term, Year 3 are looking at Sikhism during their RE lessons. They started off by looking at the story of Guru Nanak and how he became a teacher of the Sikh religion. They learnt about how he disappeared for three days and returned with the teachings of their God, Waheguru. They had to work in groups to show what the thought Guru Nanak did during his three days of disappearance.

This morning, Year 3 learnt all about sleeping. They had to discuss what the thought was a good bedtime routine and then they learnt about different ways to help them sleep. They also created their own sleep masks and a dream catcher.

This afternoon, Year 3 looked at Tsunamis and discussed what causes them and had to use technical language to create explanations. They created their own tsunami simulation in trays and using blocks and looked at how waves were formed when a seismic force was created. 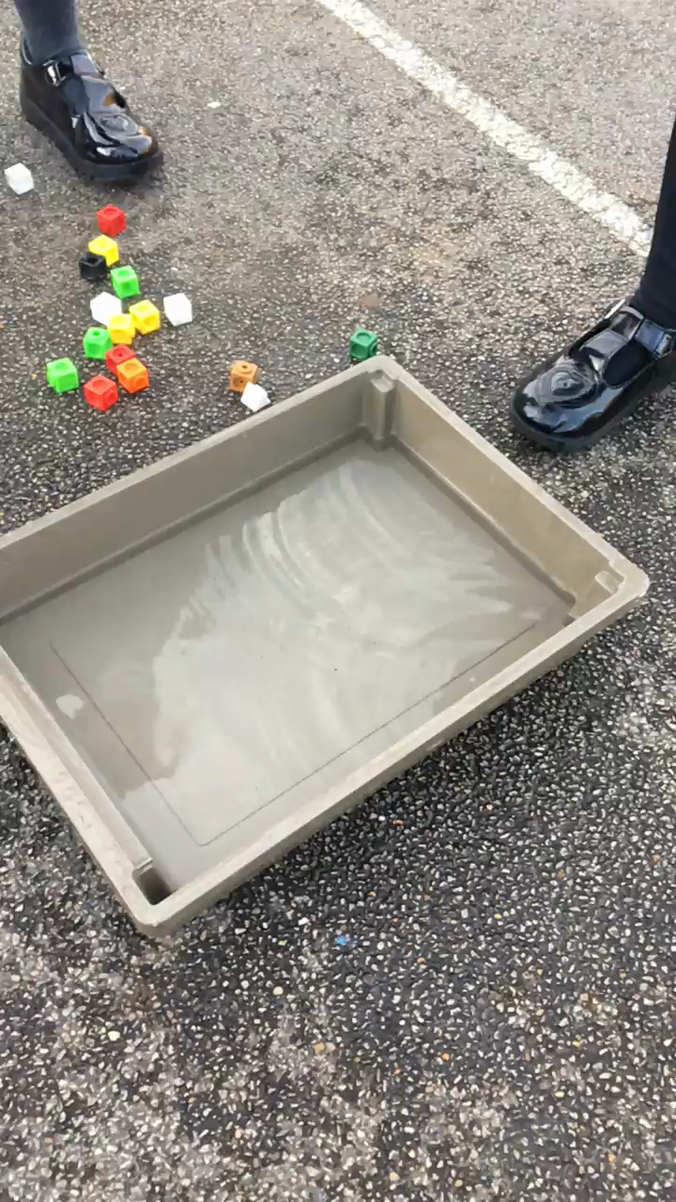 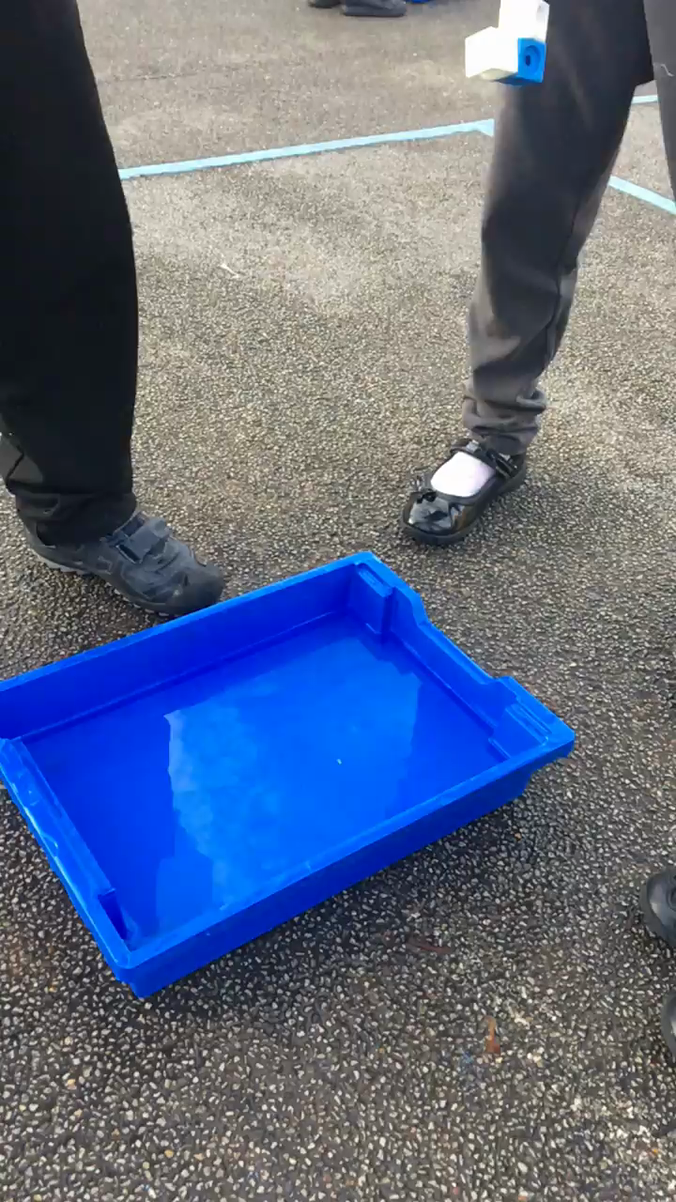 This afternoon, Year 3 looked at Earthquakes and Tsunamis in more detail. They looked at the Richter Scale and understood how it was used to measure the impact of an earthquake. They then looked at images of an earthquake and wrote down what damage they could see and gave it a score from that. They then looked at how earthquakes under water can cause a tsunami and they looked into the 2011 earthquake and tsunami in Japan. They had to consider what the impact of these events has on the environment and human life. 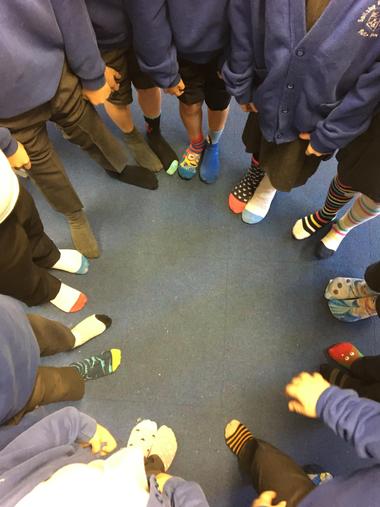 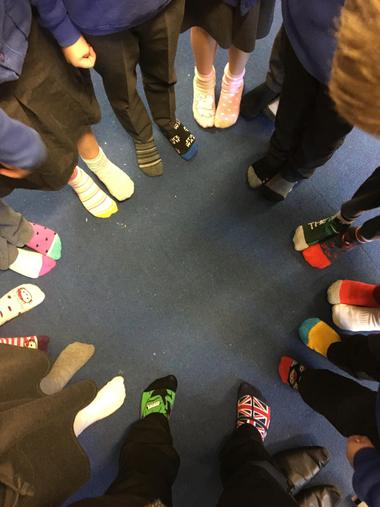 This week, Year 3 have been creating some descriptions about volcanoes. They had to try and use similes, alliteration as well as onomatopoeia words. They then had to put this into a poem form; they had the choice of creating a shape poem or a narrative poem.

Year 3 and 4 were very lucky today to have a special guest come into school and talk to them all about rocks. PhD Geology student, Mr Head spoke to the children about different types of rocks, where they could be found and how they are used in different buildings in the local area. They then had to work in groups to investigate rocks and decide on how to group their rocks using different criteria e.g. the shape of it, the colour of it etc.

Year 3 have been looking at volcanoes in English this week and using super adjectives to describe them. Today they looked at pictures of a volcano erupting and then had to create phrases to best describe them and challenge themselves to use similes. Here are a few examples of the sentences...

This week, the children in Year 3 are focussing on measurements in maths and one group investigated the length of different items around school. They had to think about what the most appropriate piece of equipment was to measure an object and also what units were used to measure.

This week, Year 3 are focussing on recounts based on their launch event from Tuesday. Today they looked at features of a recount and then created their own success criteria to use the rest of the week.

Year 3 were lucky today to learn all about Chinese culture and history from our Chinese language assistant, Meta. They also learnt how to say, 'Hello'.

This morning, Year 3 and 4 joined together in an eruption of activities! They took part in five different activities, which explored their new Tremors project. They created their own lava lamps, made seismometers, created rock sculptures, used clay to make victims of Pompeii and they also created earthquake proof buildings! It was a very busy morning but certainly introduced the new project to the children and made them excited for their learning to come.

Unfortunately not the ones with chocolate chips.

Some cookies are necessary in order to make this website function correctly. These are set by default and whilst you can block or delete them by changing your browser settings, some functionality such as being able to log in to the website will not work if you do this. The necessary cookies set on this website are as follows:

Cookies that are not necessary to make the website work, but which enable additional functionality, can also be set. By default these cookies are disabled, but you can choose to enable them below: